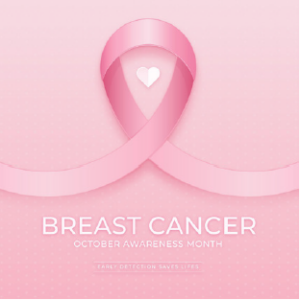 Nearly 10 years ago, Sheri Meidinger went to the doctor for an appointment to check on a painful knee.

The medical staff asked her if she wanted to get a mammogram as part of their routine with patients. Sheri remembered it had been a while since her last screening and thought it would be a good idea especially since she was already at the doctor’s office. Why come back for another appointment?

“I had no symptoms and I thought, ‘I am 42, it’s not going to happen to me,’” said Meidinger, a Medical Assistant with Heritage Health. “But it can happen. Breast cancer is not discriminatory. It can happen to anybody.”

Her initial mammogram caused her doctor to order a second. Then a needle biopsy.  Sheri had intraductal carcinoma, uncontrolled growth of cells within the breast ducts. Tests revealed the cancer had not spread  throughout her body.

“I was in stage 1 and it was about to go to stage 2,” said Meidinger. “Everything happened so quick. Within two weeks, I was having surgery (a lumpectomy) and then I started radiation. Fortunately, I didn’t have to have chemotherapy.”

She looks back at that whirlwind experience and realizes how close she came to becoming another fatal breast cancer statistic.

“It wouldn’t have been caught by a normal breast exam,” she said. “It was all found by the mammogram. It’s not in my family history. If I had waited another year, who knows what stage the cancer would have advanced to. A mammogram absolutely saved my life.”

Others aren’t so lucky.

Breast cancer is the most common cancer among women in the United States. One in eight women will be diagnosed with breast cancer during their lifetimes.

More than 40,000 women and men die from breast cancer every year. Many of these deaths could have been avoided, said Taryn Grattic, Post Falls Clinic Medical Director.

“Breast cancer is highly preventable by doing mammogram screenings,” said Grattic. “I have personally witnessed being able to catch something that would have resulted in the patient dying.”

Grattic says women should have mammograms every two years after they turn 50 years old.

Some women are considered high-risk if a primary relative has had breast cancer. Those women should have annual mammograms starting at age 40.  She also notes that women should perform self-exams regularly.

“Mammograms are incredibly important,” said Grattic. “The screenings really do save lives.”

This year, Heritage Health is partnering with Kootenai Outpatient Imaging to deliver mammograms to its patients. No referral is necessary.

Sheri has been cancer-free for almost 10 years. She shares her story in hopes of inspiring other women to get their mammograms.

“It doesn’t hurt,” said Sheri. “Yes, it’s a little uncomfortable, but it’s a very simple and life-saving thing to do. You have family, children, friends, who are all there in your life. They don’t want to lose you. I tell all my patients to get their mammograms because it’s so important.”