Step Away from the Smartphone 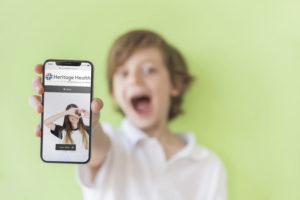 Children’s screen times are going up despite mounting evidence that computer technology is having a negative impact on their physical and mental health.

“My concern level is high,” said Heritage Health Pediatrician Dr. Nicole Odom. “These devices and games are designed to be addictive. The long-term consequences could be very harmful to a child’s development. There’s a lot we don’t know.”

What is known is that electronic technology continues to become more sophisticated with each passing day too.

Parents continue to wrestle with managing their child’s screen time and typically come up short. Not surprising, considering kids are bombarded with media from all directions at home, school and pretty much everywhere.

“It’s something I talk with parents about every day,” Odom said. “They don’t know how to control it and it’s a huge problem. Many times, the parents have their own issues managing screen time. They can’t let go of their phone.”

The American Academy of Pediatrics recently announced it was recommending more leniency for screen time, encouraging parents to create a media use plan and to have screen free zones at home.

Odom encourages parents to have a good media plan for their children and to set real limits, like no screens at the dinner table or using the computer right before bed.

“Parenting is just hard,” she said. “You have to set a rule and stick by it. There is a lot of social pressure kids face to use these devices. Find activities that replace the screen time and encourage at least 60 minutes of physical exercise.”