Celebrating over 20 Years of Nonprofit Collaboration

It started with a handful of people bumping into each other, way too often. It led to a group of community minded leaders in about 1995 meeting monthly to address how Kootenai County nonprofit and service organizations could work together for everyone’s mutual benefit.

By August of 1996, Karen Cotton, ( Idaho Department of Health and Welfare), Chris Gee, (Mountain States Early Head Start), Morgan Richardson, and a few others, formed the Kootenai Alliance for Children and Families, which was officially incorporated in November of 1997.

Meanwhile, Kagey Company was publishing numerous regional nonprofit newsletters for civic and other organizations. Publisher, Kiki Miller, convinced a few of the organizations to join together to create a three-times-a-year family news publication and to merge their mailing lists to both save money & increase their audience.
A partnership with the Kootenai Alliance for Children and Families and The North Idaho Family Magazine was forged, and successfully accomplished promoting collaboration, bringing organizations and programs together, and reducing the duplication of services.

The Kootenai Alliance for Children and Families had multiple projects, participants, and collaborations, but its major grant focused its work on teen substance abuse prevention. At the fulfillment of that grant, the KACF, concluding its work dissolved, completing a successful era of positive community impact.

As KACF transitioned out of the sector, The North Idaho Family Group absorbed a portion of the need for collaboration among non-profits while adding more services, membership outreach, communications, and marketing programs in fulfilling its mission of healthy families and lifelong learning. “It was a natural transition that allowed 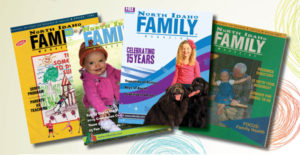